Outlaw Galaxy 4: Little Wind and Other Tales Five short stories of magic, wonder and adventure among the stars and distant worlds of Outlaw Galaxy. Free at most retailers: Short story collection, 15,000 words, about 45 pages, reading time: one hour.

Outlaw Galaxy 2: Fugitive Among the Stars Trip and his friend Johnnie O. visit Johnnie's cousins for a simple vacation riding anti-grav scooters in the trails and woods of Karrison's wilderness. However, their plans are interrupted when an out-of-control freighter crashes near their campsite and they rescue its badly injured pilot, Bosh Tippen. The boys find themselves pursued by gunmen looking to capture Bosh and return him to vicious gangster Croll Weixx! Novel, 72,500 words, 207 pages, reading time: five hours.

Outlaw Galaxy 1: Trip and the Space Pirates Benjamin "Trip" Trippany lives with his Uncle Craz in the busy port city of Pennick's Crossing, working in his Uncle's starship repair bay while dreaming of someday having his own ship and adventuring among the stars. A chance encounter and chase through the bustling city delivers him into the clutches of Diamond Black Joe, the infamous space pirate. Forced to join the pirate gang, Trip learns that they plan to attack and capture a Sh'nar cargo ship fleet, where his best friend Jinx works. Forced to choose between his own safety and saving his best friend, Trip is plunged into a rousing space adventure filled with deep space battles, shipboard blaster shoot-outs with pirates and a desperate struggle to save the Sh'nar from Diamond Black Joe's pirate gang. Novel, 69,000 words, 197 pages, reading time: about four and a half hours.


Star Wars: The Essential Guide to Vehicles and Vessels 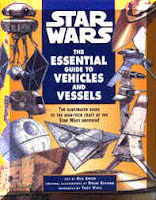 A comprehensive guide to 100 of the coolest starships and vehicles from the classic Star Wars movies, novels, comic books and games. How does Luke Skywalker's X-wing stack up against the Empire's TIE Interceptor? How deadly were the Empire's Death Stars? What makes the Millennium Falcon the "fastest hunk of junk in the galaxy"? Each entry includes a description of the vehicle or starship, as well as an illustration and detailed diagram. Del Rey Books * $18 * ISBN 0-345-39299-X


Star Wars: The Essential Guide to Weapons and Technology

Don't just read the novels, join the action! Take on the role of a Rebel fighter pilot, a Jedi Knight, a smuggler or anything else you can imagine as you and your friends battle the forces of the evil galactic Empire.

Praised for the simplicity and intuitiveness of the D6 role-playing system introduced in the first edition of the game, the Second Edition greatly expanded techniques for cinematic storytelling, added many more skill and character type options, and greatly expanded the scope of the Star Wars roleplaying game to cover all eras, from Republic era to well into the New Republic era, while detailing how to player all types of characters beyond the traditional "Rebels vs. the Empire" roles. 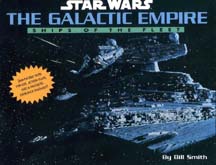 Star Wars: Ships of the Fleet: The Galactic Empire An amazing three-dimensional "pop-up" book with a comprehensive guide to the Empire's most deadly starships and vehicles. See the interior of an AT-AT Walker, find out how the many types of TIE fighters stack up in battle...and see, in dramatic fashion, how the Empire's Super Star Destroyer Executor stacks up against the other ships in the fleet! Little, Brown * ISBN 0-7522-2270-8 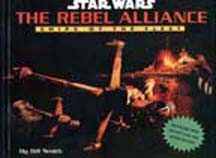 Star Wars: Ships of the Fleet: The Rebel Alliance The Rebel Alliance's most powerful combat vehicles and starships are described in this fascinating three-dimensional pop-up book. See the interior of Luke Skywalker's X-wing and the workhorse Y-wing fighter, find out about the Alliance's amazing A-wing and B-wing fighters and learn about the Mon Calamari battle cruisers and their orbiting starship yards! Little, Brown * ISBN 0-7522-2275-9

Posted by BillSmithBooks at 7:01 PM No comments:

From 1991 to 1997, he served as the Star Wars roleplaying game line editor for West End Games. In 1995, he was voted "Favorite Designer" by the RPGA, the world's largest organization for role-playing game enthusiasts. He has also written for Hershey Foods, the WIT Agency, and has been involved in motorsports promotion, marketing and journalism for nearly three decades.

Bill can't remember a time that he didn't love science fiction and fantasy. He remembers being three or four years old and watching Star Trek reruns with his Mom and spending time in his Kindergarten class drawing crude pictures of Sleestaks and thinking up new story ideas for Land of the Lost.

Bill was in the fourth grade when he realized that he wanted to be an author. Growing up in a small, rural town, he discovered Star Wars not through the movies, but through comics and novels.

He very clearly remembers pestering a classmate to borrow his copy of the Marvel Star Wars Super Special, flipping through drawings of X-Wing and TIE fighters battling above the Death Star, and thinking to himself, "I want to write this when I grow up!" He then got the Star Wars novelization and The Star Wars Album with all kinds of cool pictures and deatils. It was love.

His fate was decided. He spent countless hours writing stories featuring Han Solo and his trusty sidekick, Luke Skywalker, and soon after that, added Battlestar Galactica and Buck Rogers stories, in addition to creating his own characters and settings. In eighth grade, he spent a few minutes flipping through a friend's Dungeons and Dragons rulebook and was captivated. It led to a long-time fascination with creating adventures set in the world of elves, orcs, and twenty-sided dice. At about the same time, he also discovered and fell in love with Marvel and DC comics, read his first Tolkien and Terry Brooks, and his homeroom teacher introduced him to the wonderful Brian Daley Han Solo novels.

Bill earned a BA Public Communications (1990) from the The College of Saint Rose in Albany, NY, where he was editor of the student newspaper. During his college years, he also did public relations and race announcing for the Champlain Valley Racing Association, all the while hoping to write roleplaying games, comics and fiction professionally.

In 1997, Bill left West End Games. He and his wife returned to their hometown in the foothills of New York's Adirondack Mountains. At that time, he began writing what would become the Outlaw Galaxy series. In addition, he served as PR director and promoter at Mohawk International Raceway (then Frogtown International Speedway) and taught at a local high school.

In 2000, Bill and his wife moved to Central Pennsylvania, where he worked as a copywriter for an advertising agency. He developed and wrote the original HersheysRacing.com website (now inactive). In addition, he has held a number of jobs, both dreadfully ordinary and delightfully unusual. He particularly enjoyed his time as a ghost tour guide in Gettysburg, PA (GhostsOfGettysburg.com) and as announcer at Hagerstown Speedway and Susquehanna Speedway Park (now BAPS Motor Speedway).

In 2004, Bill and his wife returned to their hometown in Northern New York, in the foothills of New York's Adirondack Mountains and just a few miles from the Canadian border. They still live in their hometown, with their son Billy and their adopted poodle, Ted, and enjoy much laughter and a great deal of gratitude for the many blessings they have in their lives.

Bill works a day job to support his writing habit and enjoys writing Outlaw Galaxy stories. He hopes you enjoy them.


Posted by BillSmithBooks at 6:36 PM No comments: