Telling the Truth is a Dangerous Thing

We live in a time of outrage and atrocity, where our leaders mock the very notion of decency and compassion towards our fellow man. We live in an era where our leader is a man who described a known child sex predator as a "great guy."

An evil man who has expressed indifference at the suffering he and his policies are directly inflicting on children who have done nothing wrong.

These are merely the most recent of his manifold offenses against decency and the law.

Trump is torturing and traumatizing children. There is simply no other way to describe it.

And those who support him are complicit and responsible by empowering him.

Millions of his followers profess to say that life is sacred. Unless, of course, it is the life of an innocent child from a foreign land. Or the child of a poor person. Many of those who speak so much about their faith and moral purpose in being "pro life" express profound indifference to the suffering of those "sacred" lives once the child is born, particularly if born, through no fault of its own, into a family in poverty.

They profess to respect every child's life and yet could not care less how much millions of children suffer so long as their taxes are cut and the flag is waived and the President professes to honor freedom and God, no matter how much his actual actions demonstrate that he is man only of falsehoods, not faith.

The Bible in numerous places counsels believers to show compassion and kindness to foreigners, the weak, the powerless. And yet Trump's supporters, Bible in hand and quick to quote verses that are convenient to them, turn their backs on the suffering of these strangers.

I hope they realize how hypocritical they are before it is too late and they face their final reckoning where Jesus turns his back and says to them, "You never knew me."

Political cartoonist Michael DeAdder raised a firestorm of controversy when he drew a cartoon that simply illustrated the truth of Donald Trump's depravity and cynicism and cruelty. He got fired. 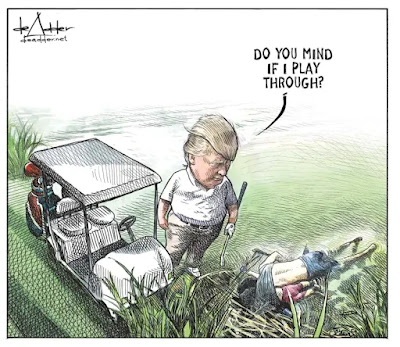 He simply told the truth.

Telling the truth is and always will be God's work.
Posted by BillSmithBooks at 7:42 AM 1 comment: